June 24, 2012
After exploring Ko Phi Phi Leh for half an hour and snorkeling at the bay for another half an hour, the speed boat took us to Ko Phi Phi Don where we would have our buffet lunch. As opposed to the uninhabited Ko Phi Phi Leh, Ko Phi Phi Don is home to majority of Moslems in Phuket. There were a lot of hotels and resorts on the island, yet no motor vehicles were allowed to operate. You could rent a bike to explore the area, though.

It was around 12.30 when we touched down Ko Phi Phi Don. The fact that humans actually lived on the island and somehow still managed to do justice to its nature was simply jaw-dropping. Even at the shore, the water was as turquoise as a gemstone! 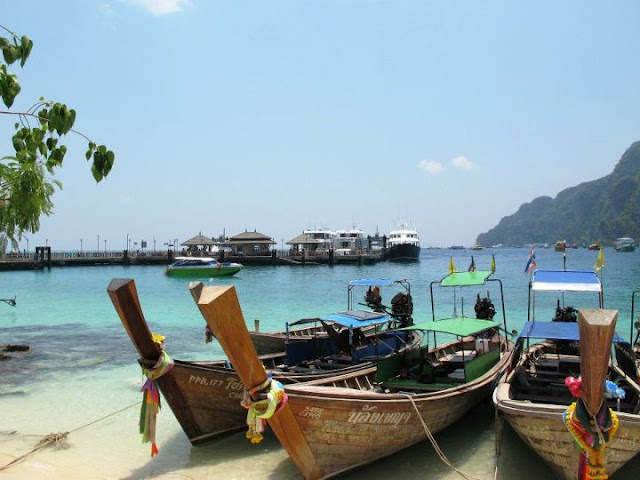 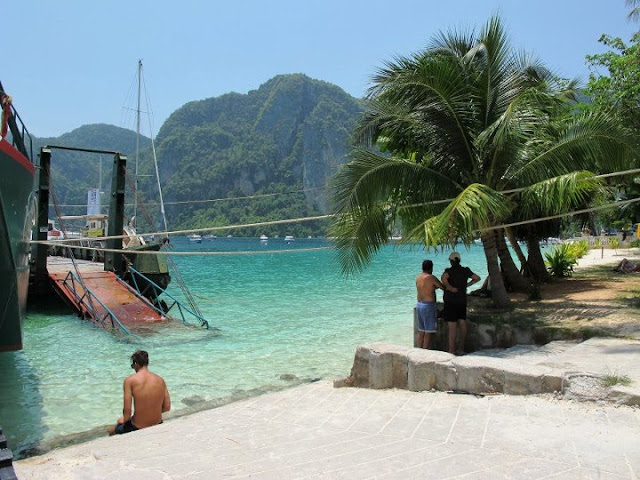 People of Ko Phi Phi Don could be a good community role model for being committed to take care of their environment despite being one of the most crowded tourist destinations in Thailand, which leaves me personally feeling envious to the inevitable natural beauty this place possess that's well-taken care of.
We had our buffet lunch at a restaurant by the shore. Forgot the name of the resto, though. The menu varied from rice to pasta and lots of chicken drumsticks and unlimited source of fresh watermelon and pineapple slices. 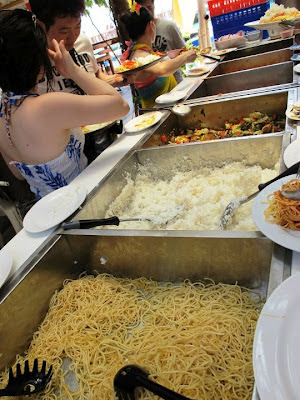 After lunch, the boat took us to Kai Nok Island which is literally the hottest beach I've ever been  to!  On the way to Kai Nok, Britney entertained us with his/her rendition of Rihanna's "Please Don't Stop The Music" in this revealing sailor girl mini dress!

Reaching Kai Nok Island, I couldn't exactly tell how high the temperature was, however looking at the shades that spread all over the island, I concluded that even the tourists who were so used to having the hottest summer in their home country couldn't stand the heat of Kai Nok Island. Every passenger got one beach bench under these colorful rainbow umbrella. Cokes and fresh fruits were handed out while the tropical wind from the Indian ocean blew to cool down the heat.

A few moments later after lolling around on the beach chairs, Nana and I decided to stroll around the island heading east just to find a small bay with this rare view. 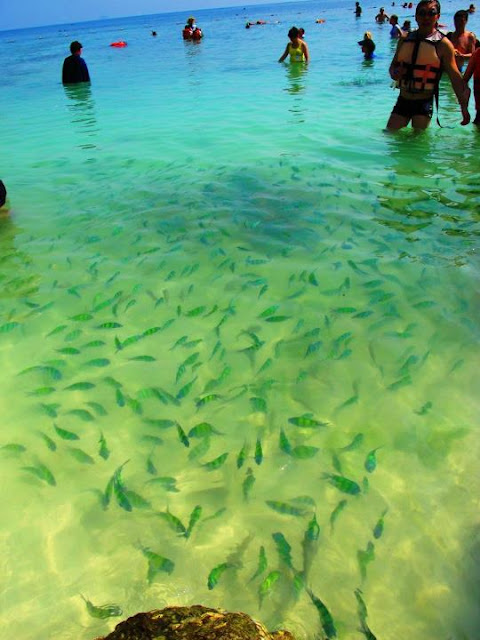 Being the normal tourists that we were, we certainly took gazillion of pics and observed that quite a lot of people were snorkeling which was definitely inviting. So we went back to our shades and put our swimwear on. Holding goggles and fins in  both hands, we surely were ready to jump in the water! I can't find any requisite words to express what I witnessed underwater. It was a memorable picture I shall keep to myself forever!

Around 4.30 in the afternoon, we headed back to Phuket main island and were driven to the hotel to get prepared for Phuket nightlife which I'm gonna blog on the next post!