April 21, 2012
It was around 08.00AM when the alarm rang off and woke us up to the sunlight that was beaming through the closed curtains. I slowly shuffled to the window sleepy-eyed and took a peek outside. Then there I was, having my first sun exposure in Thailand since our touchdown the night before (see here if you haven't read our arrival in Phuket). Adjusting my eyes to the blinding sunburst, I tried to get my senses absorbing the warmth of Thai morning sun and taking in the panorama of Phuket Old Town from our room in the third floor. Here's what it looked like:
After taking a bath, grooming up as tourists, and packing our bags; we went downstairs to the reception and checked out. Yup, we stayed in Phuket Old Town for one night only and intended to spend the rest in Patong. Yet first, we were planning to go to Wat Chalong, esteemed as the most important of the 29 Buddhist temples in Phuket. Out of simplicity, we entrusted our belongings to the hotel receptionist where we would come back to pick them up later in the afternoon when we're leaving for Patong.
Carrying shoulder bag for camera, passport, and sunblock (and the girls holding their handbags), we marched along the street, beyond excited to explore Phuket under the glaring tropical sun. It was almost 11 and we hadn't had our breakfast. As Gina and I only brought US dollar currency, we had to cash it first to Thailand baht. Fortunately, across the street from our hostel, there was the Thai Military Bank (abbreviated to TMB) so we could convert our money there. For your reference, it would be safer to bring USD than IDR if you're traveling abroad because USD is most likely accepted in every bank or money changer.

First stop: breakfast (or brunch). This would have been interesting -as the restaurants around the hostel offered inexpensive meals- if it weren't for the nauseating odors of raw mutton or pork coming from those diners along the sidewalk. As soon as I smelled them, I lost my appetite in a tick. Gina then chose to buy tuna bread at 7-Eleven nearby. Nana decided to skip the meal as well, however she was intrigued to try an assortment of veggies and shrimps sold on the street vendor in front of 7-Eleven shop. I don't know what it's called but it looked like this:

We were previously informed by the hotel receptionist that if we wanted to go to Chalong, it'd be best for us to take the bus. So we took the bus -which resembled a truck by the way- and headed to Wat Chalong. It only cost us 30 baht per person. Talking about cheapness!
The road trip from Phuket Old Town to Wat Chalong took about half an hour. The view itself was not much different from the Denpasar bypass, with wide and smooth roads but less cars and no traffic at all. Then again, you could tell that you are in Thailand because of the Thai writing.

Wat Chalong itself is a complex of temples which is dedicated to two profoundly honored monks, the late Luang Pho Chaem and Luang Pho Chuang, who helped the injured people of Phuket with their knowledge of herbal medicine during a tin miners rebellion, widely known as the Chinese Coolie Rebellion, in 1876. They then became the abbots of the temple in which we could see their cast statues below, along with other pictures that, hopefully, speak a thousand words: 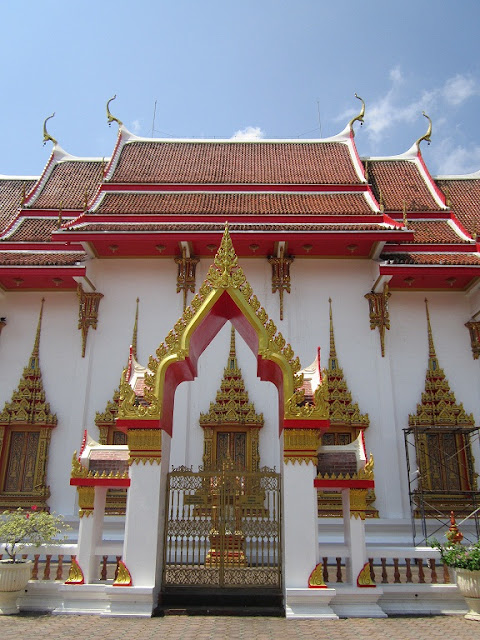 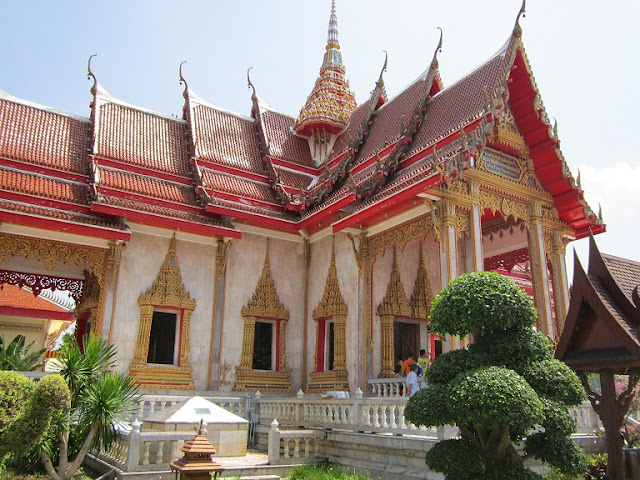 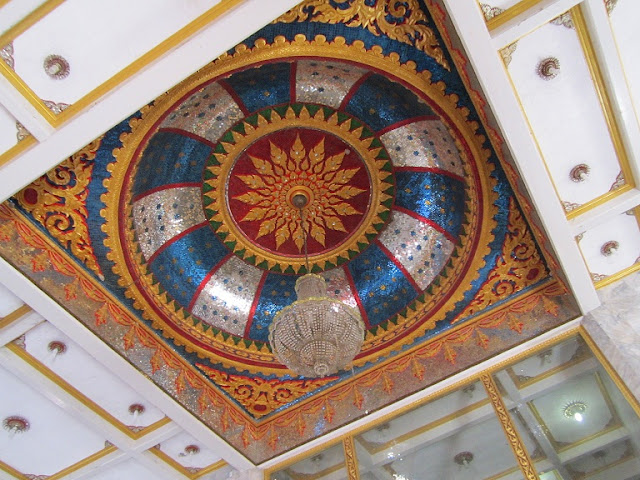 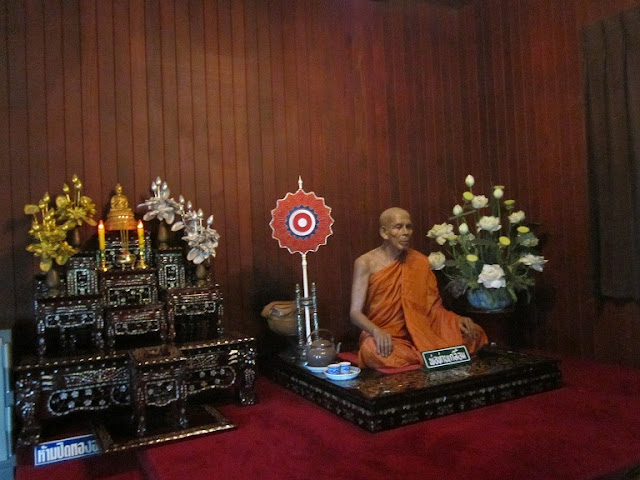 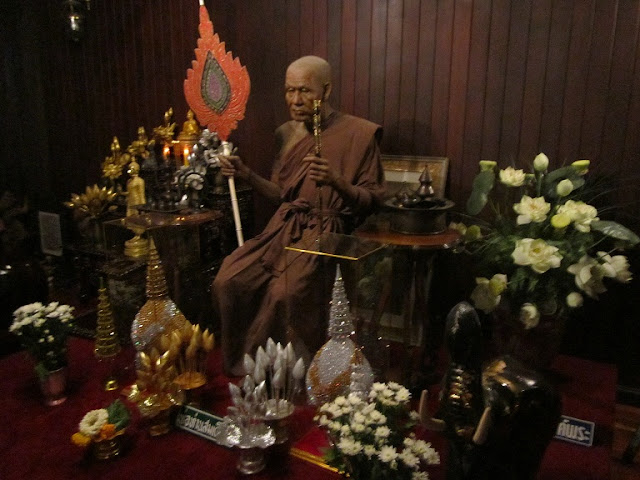 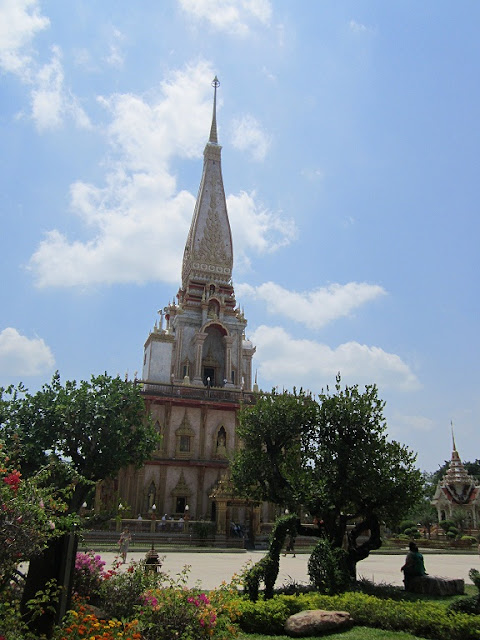 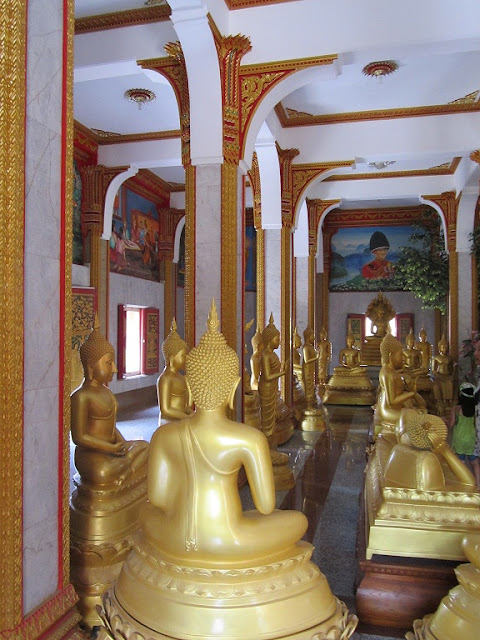 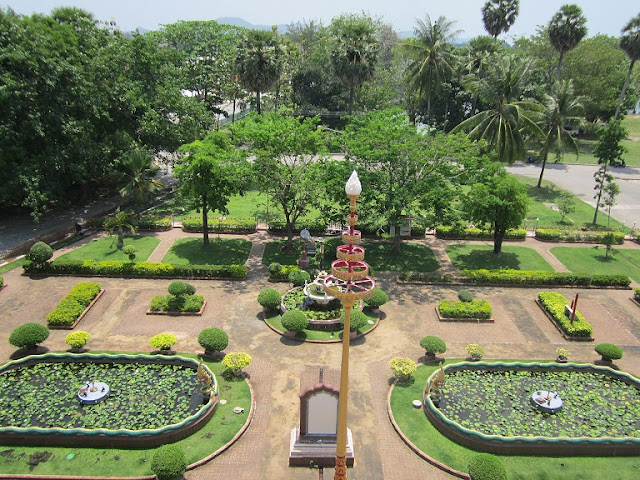 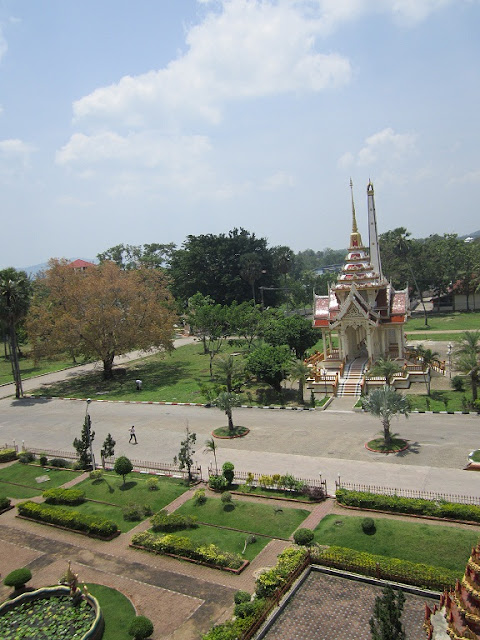 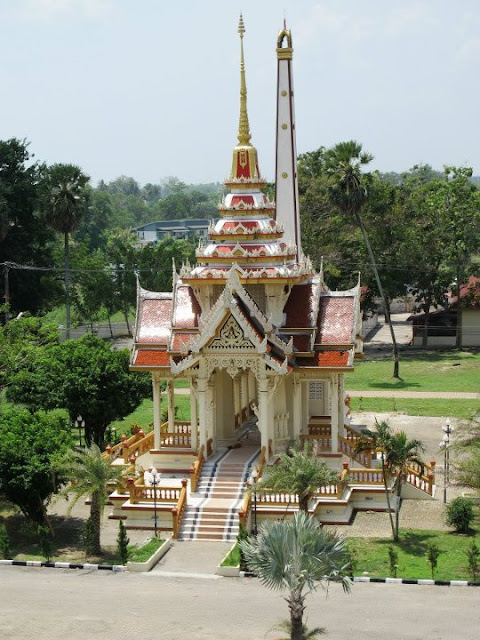 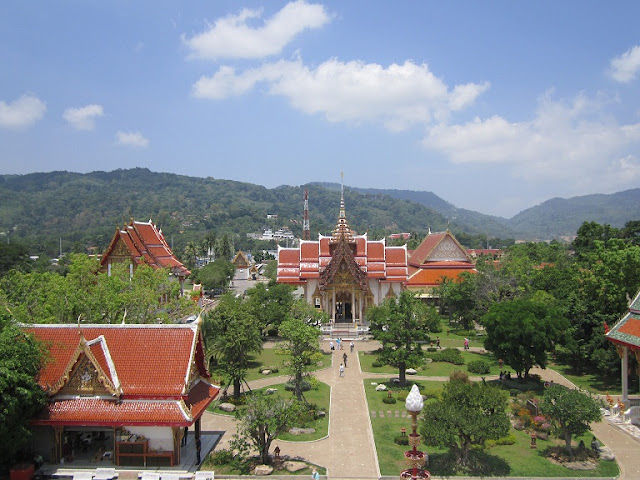 On our way out, Nana saw a man selling Khao Lam on a motorcycle. Khao Lam is the traditional Thai sticky rice cooked in bamboo tube. We were actually having a hard time communicating with him as he couldn't speak English very well. Praise to Lord we met this girl from Bangkok who helped us out translating our English to Thai and vice versa! Anyway, we took a bite and it was deliciously sweet! We all loved it! Also, according to Gina, this man was too cute to be a Khao Lam seller. Hmm.. What do you think? :D
This concludes our trip to Wat Chalong. Don't worry, the Asean Trip Day 2 has not ended yet. I still have more stories and pics to share as subsequently we went to The Big Buddha, Patong Beach, and Ban Kamala that day, which will be posted later. Thank you for reading anyway.