April 23, 2012
Our next destination was The Big Buddha Phuket, located on the top of the hill between Chalong and Kata. The road leading up to The Big Buddha was actually a bit tricky, so we decided to take taxi to get there. At the exit gate of Wat Chalong, a taxi pulled over near us and the driver came out. Guess what? The driver was a woman! It was the first time ever I encountered a woman taxi driver. She asked us where we were going and after negotiating for a while, we managed to get 500 baht. Quite expensive, huh? However, despite the accent, her English was good so we were fine with the price.
Anyway. The road to The Big Buddha was sloping upward. It was like when you're going uphill to the Garuda Wisnu Kencana (GWK) in Bali, only steeper. Hat off to Ms. Taxi Driver! While driving us to the top, she shared some trivial info to keep us entertained along the way. She said that Phuket had no train line (so I noticed); that it took approximately 10 hours to go to Bangkok from Phuket by bus; and that there were very few women taxi drivers in Phuket and she's one of them! Cool. Talking about women empowerment!
After 30 minutes of climbing up the hill (well, in a car, of course) we finally arrived at The Big Buddha Phuket. 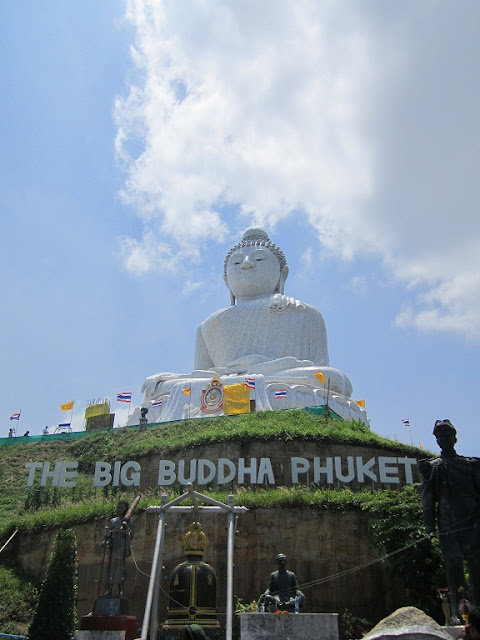 It was still a work in progress, actually. There was no entrance fee, though. However they put the donation boxes and trees everywhere so you could always chip in for the building of the Big Buddha whenever convenient. You could also buy souvenirs, lotions, aromatherapy, and the likes to help the ongoing development of the unfinished Big Buddha statue. There was also marble donation where you could donate a brick or two with your name written on it to be put eternally in the Big Buddha construction. A brilliant way to raise the funding! 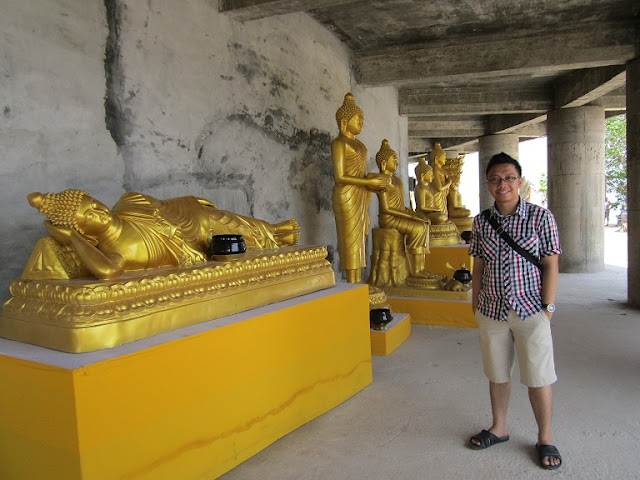 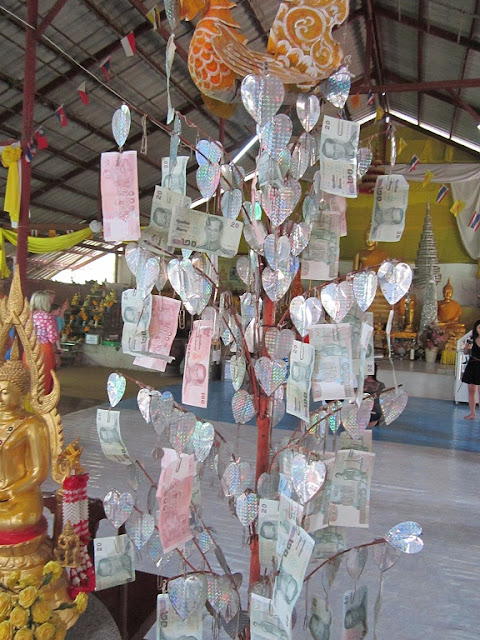 The Big Buddha is one of few viewpoints where you would be able to get this rare 360 degrees view of Phuket.
It was around 02.30PM when we had to go back to the hostel to pick up the luggage and headed to Patong as we needed to catch the Phuket FantaSea show in Ban Kamala. Ms. Taxi Driver drove us back to Wat Chalong, from which we would go back to the hostel by taking the same truck bus that previously took us to Wat Chalong earlier in the morning. So we said goodbye to the kind Ms. Taxi Driver and waited for the bus.
* Honestly, I gave up remembering Thai people names. They're so hard to pronounce! Let alone to spell. The only Thai person whose name I could register in my brain is Mario Maurer, and that's not even his Thai name. So pardon the naming.
Ok. Back to business. Guess what? The bus was only available every one-hour. When we finally spotted one, we waved our hands enthusiastically, and.... the bus did NOT stop! WTF? We were getting frustrated. As we didn't want to waste another one hour so we decided to take taxi. When we asked the taxi driver (who was a man) why the bus didn't wanna stop while its seats were still unoccupied, he told us that we were waiting at the bend of the road which was forbidden. I mean, for God's sake, how were we supposed to know that it was forbidden? There was no sign at all that indicated so. God. And the thing that bummed us out was that there were some local people nearby, but they didn't tell us that we were not supposed to wait right there! How cruel! The taxi cost us 400 baht, by the way. There goes our bucks!
The taxi driver then offered himself to accompany us finding a travel agent to book a trip to Phi Phi Islands and James Bond Island, in case we were interested. Coincidentally, they were our destinations for the next couple days. Thinking that it would be cheaper to buy the tickets here in Phuket Old Town than to buy them in Patong, we allowed ourselves to be escorted to a travel agent called Diamond Travel in Phuket Old Town.
After going through all the brochures, we went into intense negotiations and reached the bargain price for 2-day trip to Phi Phi and James Bond islands at...
I think I'll tell you that on the next post. You know, just to keep it a mystery. Haha. I'm sleepy, actually.
More later,
Begy
Travel