February 09, 2012
Okay. So the migraine is kicking in again. I have just taken my medicine though, and am now waiting these eyes to get sleepy. In the meantime, I'm gonna try to write anything I can think of at the moment, as this seems to be the only way to spill out whatever thoughts crossing my crazy mind right now. Oh God, I just need to rant. Some people say that writing is an effective therapy to relieve the stress, so why don't we give it a shot?

Anyway, so I watched Chronicle the other day. 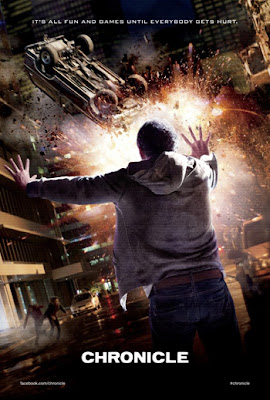 But before elaborating on my Chronicle experience, I'd like explain my condition recently. So here's the thing: lately, I've been kinda letting myself to be left behind in terms of keeping up with the most updated information on what's hot on the box office list. A habit that I never missed when I was younger (and for the record, I'm still 26. Not that old...). Then I accidentally stumbled upon a Joko Anwar's tweet where he praised this movie called Chronicle because of its uniqueness using a self-shooting camera (or when I wiki-ed it, such technique is actually known as "found footage") and on how awesome the movie is (or something like that. I'm paraphrasing here. Can't really recall what he exactly tweeted). Obviously, I was buying it and went curious about the movie.

Well, coincidentally, still on the day when I read that tweet, Ari, a friend of mine from Bandung who's now also working in Jakarta asked me out to watch the movie later that afternoon. I agreed and immediately canceled my working out agenda which fortunately took place in Pondok Indah Mall (PIM), the same mall where we planned to watch the movie. So we went upstairs to PIM XXI cinema and I think I was sitting in the same auditorium where I watched the last movie which was Arisan 2 (a hilarious Indonesian movie, btw. Actors Rio Dewanto, Edward Gunawan, Sarah Sechan, and Ardinia Wirasti stole the scenes).

Ok. Now back to the movie Chronicle. Prior going to the cinema, after Ari and I agreed to go on our movie-date, I YouTubed the trailer right away to give myself a big picture on how the movie would look like. First thing that I noticed was that I knew none of those actors playing in the movie, however I liked the trailer and got the impression that the movie would be exciting as it portrayed a story about three teenage boys who discovered a crystalline object that gave them superhero-like powers. But I knew it was not a superhero movie. So there goes my curiosity.

Long story short, the movie began. On the opening scene, we were introduced to Andrew, a high school teenager who decided to videotape his day-to-day life, with the first taping being on how he was actually living with an abusive father. From that moment itself, I assumed that Andrew would develop a grudge against his father. As if his life wasn't miserable enough, he was bullied a lot at school, you know for being dorky and all. I mean, videotaping everything around you all the time is sort of dorky, no? Anyway, from the bullying, I could tell that the grudge was growing bigger.

We were also introduced to Andrew's cousin named Matt with whom Andrew went for the ride to school or parties where at one party, he met Steve, the school's popular guy who later had Andrew joined him and his cousin Matt, who apparently happened to be Steve's buddy, to videotape a bizarre phenomenon: a hole on the ground that sounded off some strange noise. Being curious (or stupid), they entered the hole and accordingly found a crystal-like object radiating some colorful glows. Indeed, some might say that this sounds rather similar to Superman and the cryptonite (or kryptonite? I don't know. Frankly, I'm not a big fan of Superman).

They touched that glowing thing and later on found themselves developing some powers from telekinetic (ability to move objects with mind) to flying (ability to, well, fly without wings...)

The boys were initially using the power merely for jokes. Playing around with it until one night Andrew deliberately (or not? I still can't tell honestly) swiped away a car whose driver kept honking on them from behind on the highway, with his telekinetic power right into a river and injured the rude driver.

From that incident, the three buddies started arguing on how they use the powers and Matt proposed some rules to avoid further accidents involving living things. The conflict among them grew more intense. Andrew, however, didn't seem to think it was a lovely idea.

So many unfortunate events (which I would not reveal here) kept happening to Andrew's life, and holding so much grudge against the world, Andrew started to withdraw himself from his friends and eventually went crazy over his powers.

I'm aware that this (well, I) may sound terrible, but things were really getting exciting when Andrew lost control and went berserk towards everyone and everything that got in his way. Matt, on the other hand, was the one who still had the sane mind and tried to tame his cousin. Guess what? It didn't work out and, as I had predicted, they ended up in an epic fight after each other! The lack of my English vocabularies can not depict how mind-blowing the battle was! I was in a complete awe! God bless whoever invented the technology for such almost-looking-real special effect!

At the end of the movie, some would find themselves feeling shocked of what they had witnessed inside the theater. Some other would feel satisfied to have wasted 80 minutes of their lives for such a good movie. I was in the latter group, fyi.

The lesson that I got from watching this movie is NEVER mess around with powerful beings or else you're gonna get screwed up BIG TIME!

I'm closing this post with a picture of my hero, Matt played by Alex Russell (and he hasn't got a Wikipedia page yet! Somebody make one, please!) 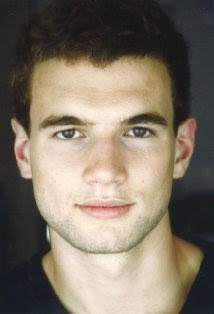