July 01, 2009
Honestly, I don’t feel like blogging.
I get this painful headache after revising my beloved final project (Yes. Now I’m going all POSITIVE. Since naming it “skripshit” was not helping AT ALL. So, Law of Attraction, hello, I happen to turn to you!). Not to mention watching Transformers EXTREMELY close from the FRONT ROW SEAT right after that.

But I think I will try to relieve it by posting some things that have been stuffed into my limited brain (which I assume would just make this gnawing pain in my head worse). But, whatever, there’s nothing to lose. Except, perhaps, my sanity (which is barely even there).

Anyway, I’ve read these two books written by Michael Scott: The Alchemyst & The Magician. Both are the first two books of The Secrets of the Immortal Nicholas Flamel saga.

To be truthful, I felt a little bit deceived after buying The Alchemyst, not knowing that it is actually the first part in six (yes, SIX) books! I thought it wasn't a series. You see, I have this issue with serials, whether it is book, TV series (pretty obvious), or movie: I can NOT stop in the middle of it. I MUST finish it to the finale! Yeah, you do the psychological diagnosis...

Surprisingly, to date, there are merely TWO books (which I mentioned earlier) that have been published.
So, I'm kicking my heels until all of them come out in complete set! Which, I don’t know when or how long!

Serously. I mean, we had to wait, like, ELEVEN YEARS for SEVEN Harry Potter books, so I guess I have at least FOUR years to go until this series is complete, that is by assuming that they will be published every year (which is, I suppose, highly unlikely)!!!

Homigod, my headache is just getting worse.

Okay. For those who have read (and loved) The Alchemist by Paulo Coelho, please do not expect that you’ll be finding any resemblance with The Alchemyst written by Scott. This book is totally different than Coelho’s, because this is kind of fantasy-mythology thriller.

The series unravels the mystery that lies beneath this plausible world we’ve known, beyond every rational thought, and out of reach to scientific minds.

Book one, The Alchemyst, starts when two so-called normal American teenagers -twin brother and sister- Josh and Sophie Newman, both are fifteen and living in San Francisco, discover that Nick Flemming, the owner of a bookshop where Josh works, is the legendary immortal alchemist: Nicholas Flamel.
And that his wife, Perry Flemming, is the immortal magician: Perenelle Flamel. 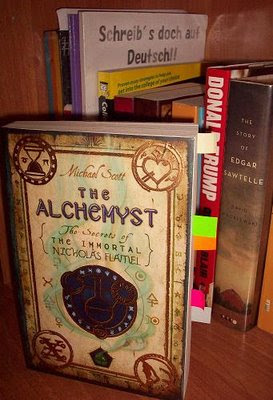 The Flamel couple is the guardians of the Book of Abraham the Mage, or often being referred to as the Codex, which contains the secret recipe of chemical compounds to make the formulation for immortality.
I have to highlight that this secret of life eternal is the least of the secrets in the Codex.
So, you can imagine what bigger secrets that could be acquired from the book.

The Codex has been the root cause of deadly battles over the centuries between the Flamel couple and another immortal magician named Dr. John Dee, who serves as pander to the Dark Elders, an ancient race that once ruled the world, long before men exist.

Apparently, the Codex also holds the secrets to reawaken the Elders race to take over the world.

That is why Nicholas and Perenelle have to protect the Codex from Dee, because if Dee ever gets his hands on the book, he and the Dark Elders he serves will remake this world as it was in the unimaginably ancient past.

And the only place for humans in it will be as slaves.

Unfortunately, Dee successfully steals the Codex and kidnaps Perenelle to be put behind bars in Alcatraz, where she is watched over by a Sphinx.

Fortunately, Josh saves the last two pages of the Codex that contain Final Summoning that could bring the Dark Elders out of their Shadowrealms (where they currently hide and live after their race was kicked out of the world thousand years ago).

This is where Dee starts to hunt them again to get the lost pages, and Nicholas & these twin teens have to find someone who can Awaken the dormant magical power that possessed by the twins.

Nicholas believes that Josh and Sophie are the twins written on the prophecy in the Codex as “the two that are one, and the one that is all”.
The prophecy says that only the twins who can defeat Dee and the Dark Elders.

Well, that is if they have mastered four elements of magic: Air and Water, Earth and Fire.

Helped and assisted by Scathach, the Warrior Maid; together they go to a Shadowrealm that belongs to Hekate, the good Elder who gets to Awaken Sophie under the root of Yggdrasill, the World Tree; then give a visit to the Witch of Endor who teaches Sophie the basics of elemental air magic.
These all happen in the midst of battle with Dee and the Dark Elders, including Morrigan and Bastet, until they finally succeeded to escape to Paris, France, using ley lines (sort of magical door of Doraemon. But WAY cooler, of course... LOL!)

Book two, The Magician, starts when four of them step out from the leygate inside the Cathedral of Notre Dame, Paris. Dee who couldn’t get through the leygate, has asked another immortal who resides in France, Niccolò Machiavelli, to capture them, but failed on his first attempt.
The team itself gets helped from Nicholas’ former student, Comte de Saint-Germain (who teaches Sophie Fire Magic) and his wife Joan of Arc. 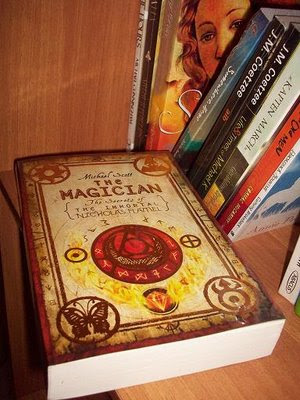 Besides having to deal with Machiavelli and Dee, they also have to survive the fights against the Disir, Niddhogg, and Gargoyles.
Here in Paris, Josh lands an opportunity to get Awakened by an Elder named Mars Ultor in Paris catacombs.

While back in San Francisco, Perenelle tries to escape from Alcatraz with help from ghost Juan Manuel de Ayala, the discoverer of Alcatraz, and Aerop-Enap, an Elder in form of huge spider-god.

Surely there are some characters, both protagonist and antagonist, KILLED and I was mourning over some of them for quite a moment, but I won't tell you who are dead. You have to read the book to figure that out.

Although I am not a big nerd of fantasy and the series itself is actually directed to young adult readers, I can tell that I enjoyed these books as good reads; plain and simple.
However, I kinda don’t like the first book, because the conflicts are not complicated and the characters do not develop throughout the story.

But then, after realizing that the whole events in book one happen in mere a couple days, I kinda chilled out.
I mean, scientifically and statistically speaking, according to psychological developmental theories, TWO DAYS are insufficient amount of time to drastically change your personality.

Eventually, I went “Okay. No big deal”, and continued reading the second book.

But after reading the second instalment, I started to like this series!

What makes me interested to the Secrets of the Immortal Nicholas Flamel saga is that, except Josh and Sophie Newman, ALL of the characters in the story seriously came from REAL prominent figures in the history who had lived on the same planet where we live today.

And the Elders, monsters, and another creepy creatures (that only deserve to stay in nightmares) came from Egyptian, Eurasian, Greek, Irish, Celtics, and Norse mythologies.

Even the book of Abraham the Mage or the Codex and ley lines are REAL.

I think if you googled them, you would find more details about them.

So, really, I got to witness these great and world-famous figures and those imaginatively amazing creatures of ancient beliefs, legends, and myths whose existences will never be justified by logic, GATHERED in a series for the adventure of a lifetime.


P.S. Rumor has it that the series will soon be adapted into an epic motion picture (a six-picture franchise, to be exact) by New Line Cinema (when i found the article, I was all "GET OUT! They’re the ones behind The Mighty LOTR trilogy!!!").
I hope they’ll make it REAL! (Well, after all, something HAS to be real, right?)

Holy crap! This post IS long! You think so? Is it because I have this headache or what? Oh gosh, it’s late. I really have to force myself to sleep. Obviously, writing doesn't vanquish aching skull.


Quote:
“I know you are afraid, but try not to be. Let me tell you, there is no shame in fear.” - Nicholas Flamel