I have finished reading another book by Alexander McCall Smith called The Sunday Philosophy Club. 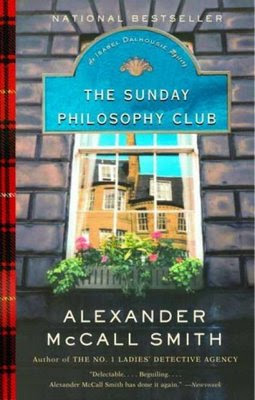 Apparently, this book is also a series but separated from The No.1 Ladies’ Detective Agency series which is written by Smith too (and which I am very fond of).

Anyway after reading it from cover to cover, I came to a conclusion that I love this series as well! The novel itself is starred by Isabel Dalhousie, an editor of The Review of Applied Ethics which is kind of journal of philosophy specialized in morality issues and loaded by ideas on how one should act according to philosophical justification.

The setting took place in Scotland, where Smith currently resides, so you would sense very strong influence of Scottish culture (mostly manners and architectural designs), art (mostly music and paintings), literature (mostly poems), and European atmosphere in general.
The main plot of the first instalment of The Sunday Philosophy Club series is started when Isabel witnessed an accident where a young guy fell to death from a balcony at a music concert. When the poor guy was falling upside down, their eyes met for a second and, probably, it was the last contact he made before he died. Of course, this so-called eye contact had been haunting Isabel. I mean, seeing such awful incident in the face is indeed dreadful. And given the nature that she tends to get involved in problems that are, quite frankly, none of her business, Isabel couldn’t help it to feel the urge to investigate why that poor young man fell from the gods.

Yes people, obviously, like Precious Ramotswe did for a living in The No.1 Ladies’ Detective Agency, Isabel Dalhousie also played as detective to disclose the mystery (although, unlike Mma Ramotswe who chose detective as a career, Miss Dalhousie acted as occasional detective, without payment, of course).

All in all, assessing the content of this book as a detective-ish book, I would say that this is a smart book. The trails to the answer of each puzzle are quite subtle and the ending is pretty much unpredictable. But I love the way everything ended.

And the reason why I said earlier that this was gonna be exciting is that there are many interesting philosophical questions raised and explained in this book.

As an editor of a journal of applied philosophy, Isabel asked herself lots of question about ethical procedures whether or not someone is behaving in appropriate manner in the respect of moral beliefs. And I found these thoughts are interesting.

Here I want to share what I consider as valuable thoughts that belong to the book (which, by the way, is already full with post-its to mark my favorite passages hehehe).

First of all, about "love" (NOT that I am currently involved in any kind of THAT circumstances. IN CASE you wonder). We are not embarrassed by those we love. We may experience passing discomfort, but it’s never embarrassment in true sense. We forgive their shortcomings, or we may just never notice them. Well, people, THAT is love.

Second of all, about “being solitary” (Note that I am NOT identifying myself with the term whatsoever). Isabel stated that it might be simpler not to allow oneself to be in love with anybody. Just to be oneself. Immune to hurt from others (or my thought, prevent us from hurting others as well). And that there are people who are alone because they CHOOSE to be solitary, and there are another people who are alone because NOBODY has ever COME to their lives and relieved them of their loneliness. SO, there is a DIFFERENCE between resignation, or acceptance, in the face of loneliness AND choosing to be solitary.

Third of all, about “hypocrisy”. To call a person a hypocrite is usually to allege a moral failing. But is hypocrisy inevitably bad? Some hypocrites deserve greater consideration. For example, would it be hypocritical for a smoker to advise against smoking cigarettes? Yes it would, because the recipient of the advice might likely call the advisor himself a hypocrite. BUT was it bad? I think his hypocrisy might be no bad thing. It certainly did not harm anybody, and indeed it might even help!

Last but not least, about “punishment”. We need to punish, not because it makes us feel any better, but because it establishes moral balance. It makes a declaration about wrongdoing. It maintains our sense of just world. But in a just world, one punishes only those who mean wrong, who act from an ill will. So we should never punish those who have no intentions to mess up (might as well being applied to kids).

There are actually more to share. But this post is coming close to break the record of the longest post in the century (Yeah, right. This post has actually bored you to death HAHAHA).
“Only the very immature and the very stupid are impressed by the depraved” - Isabel Dalhousie
XOXO
Begy Buzz
Books