Showing posts from November, 2008
Show all

The Heart Is a Lonely Hunter 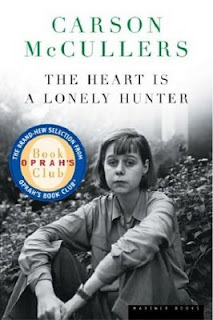 The Heart Is a Lonely Hunter by Carson McCullers was selected on Oprah’s Book Club in April 2004. Time Magazine also included the novel in its TIME 100 Best English-language Novels from 1923 to 2005. The novel itself was originally published in 1940. Actually, it was quite a work to read this book (thick and complicated). However reading classic literatures has always been an exciting pleasure. It gives me such a thrill to experience minds of the past. Back to the novel. I think “The Heart Is a Lonely Hunter” is both beautiful and tragic. The story revolves around the lives of five people who initially had no relationship one another, but as the story progressed, they found that they had something in common, and thus, were related simultaneously. Jack Blount, a socialist who pissed off with judgmental society and unfair government; Mick Kelly, a girl with many dreams but trapped in poverty and stuck with burden to support her family financially; Biff Brannon, a restaurant owner whose w
7 comments
Read more